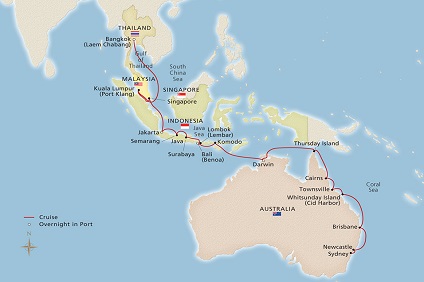 28 Night Cruise sailing from Bangkok to Sydney aboard Viking Orion.

Enjoy a 29-day cruise encompassing the rich and varied cultures of Asia and Australia when you combine Bangkok, Bali & Beyond and Komodo & the Australian Coast. Meet the people who shape celebrated capitals of Asian art and culture from Malaysia to Indonesia. Witness the cerulean beauty of Australiaâ€™s coastal isles. Overnight stays in Bangkok, Java, Bali and Darwin help immerse you in this breathtaking corner of the world.

Bangkok
Experience the cultural splendor of Old Siam, beautifully set on the Chao Phraya River. Take your time to enjoy the exquisite flavors of Thailand during a typical lunch. Then take in the other sights and sounds of one of Southeast Asiaâ€™s most colorful and cosmopolitan cities on a panoramic tour that includes a stop for an exterior view of the Grand Palace. Admire the cityâ€™s many canals plied by traditional longboats and other small vessels. You will occasionally stop for photos as you enjoy the kaleidoscopic scenery.

Singapore
This city-state is spread across 63 islands at the tip of the Malay Peninsula and was established in 1819 for the British East India Company by Sir Stamford Raffles, after whom Singaporeâ€™s famed hotel is named. Today, it is a diverse city of varied influences, as you can see during visits to the Colonial District, Little India, Arab Street and Chinatown.

Bali
Explore the deeply spiritual island of Bali, with its colorful markets and rich culture of arts, crafts and traditional dance. You will tour its bustling provincial capital of Denpasar, admiring the enormous Bajra Sandhi, the peopleâ€™s monument that commemorates their struggle for independence; take in the colors, flavors and fragrances of the local market; and explore the Bali Museum and the sublime temple of Jagatnatha.

Darwin, Australia
Perhaps youâ€™ll visit the Museum and Art Gallery of the Northern Territory, or MAGNT, to view an excellent collection of art and artifacts reflecting the region and its indigenous people. Or stop by the Lyons Cottage on the Esplanade, one of the cityâ€™s oldest buildings. Built in 1925, this restored stone house, also known as the British Australian Telegraph Residence Museum, provides a glimpse at life here in the early 20th century.

Thursday Island, Australia
Explore Thursday Island today, just off the northernmost tip of Australiaâ€™s Cape York Peninsula in the Torres Strait. This picturesque island is home to a thriving artistic community. It once hosted an international pearl-diving industry, with divers coming from Japan, Malaysia and India. You will have time to explore on your own today, and perhaps discover the history of the islandâ€™s defense during a visit to Green Hill Fort.

Brisbane
Call on the capital of Queensland, Australia, today, situated on the Brisbane River and spread over hills rising from Moreton Bay. This picturesque city is known for its Queenslander architecture, a distinct style characterized by terraces and raised living spaces. A panoramic tour introduces you to its main sights, with ample opportunity to step out and take photos. See the historic Parliament House and Brisbane City Hall. Pass the botanical gardens and famed Wheel of Brisbane. And view the Cathedral of St. Stephen.