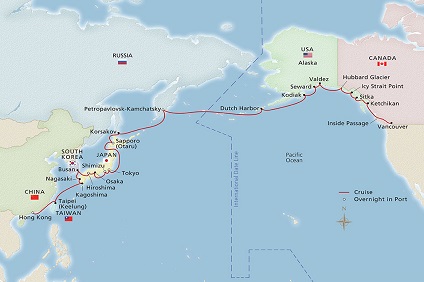 Combine North Pacific Passage and Far Eastern Horizons for an epic 37-day cruise. From the magnificent beauty of Alaska and former Soviet ports to imperial treasures and cities risen from ash, you will accompany locals as they reveal what they love most about the varied places they call home. A historic Pacific crossing links these diverse cultures, and overnight stays in six ports let you explore fully and take in the nuances and complexities of the North Pacific.

Sitka, Alaska, United States
Glimpse the Russian influence in Sitka, once the capital of Russian Alaska. Enjoy an enlightening walking tour to learn more about the fur trade that brought the Russians here. See the Russian Orthodox Cathedral and the Russian Bishopâ€™s House, built by the Tlingit with guidance from Finnish carpenters in the 1840s. As you explore, you will see many art galleries displaying the work of artists who have been inspired by the regionâ€™s natural beauty for decades. If youâ€™d like, board a plane or boat for inspiring views of Mt. Edgecumbe, an extinct volcano on a nearby island.

Kodiak, Alaska, United States
Take in the magnificent setting of Kodiak, the major city on its namesake island. Inhabited by Alutiiq natives for seven millennia, it became the capital of Russian Alaska in the 18th century. A walking tour leads you past the Holy Resurrection Church, a Russian Orthodox church built in 1945, and the Alutiiq Museum and Archaeological Repository, where artifacts chronicle the past of the native people. During a stroll along the harbor, learn about the cityâ€™s booming fishing industry. Alternately, you might join an exciting bear safari by floatplane, perhaps spotting humpback whales during your flight to the Katmai coast.

Sapporo (Otaru), Japan
Arrive in Sapporo for an overnight stay, allowing you ample time to immerse yourself in the fascinating culture of Japanâ€™s northern island. The city is renowned for its ability to transform the natural world into the highest art. Central to Sapporoâ€™s cuisine is miso ramen; the noodle dish was invented here and restaurants line the Ganso Sapporo Ramen Yokocho (Original Sapporo Ramen Street) to celebrate its many forms. The cityâ€™s golden Sapporo beer is produced here in a 19th-century brick brewery. If you wish, you may attend a special dinner with a geisha performance this evening.

Shimizu, Japan
Arrive in Shimizu for an overnight stay, affording you time to get to know this historic city on the shores of Suruga Bay and explore farther afield to the famous Mt. Fuji. In Shimizu, visit the original burial spot of the first shogun, the Shinto shrine of KunÅzan TÅshÅ-gÅ«. With its flamboyant design and bright colors, it is a testament to the status that these military dictators held in the eyes of the emperor who appointed them. You can view the suits of armor, tachi (swords) and other artifacts and enjoy sweeping views of the Pacific Ocean along the way.

Hiroshima, Japan
Arrive in Hiroshima for an overnight stay, giving you time to ponder this resilient city. Once at the forefront of industry and education, it grew from the 19th century to become one of Japanâ€™s most important industrial centers. Its devastation on August 6, 1945 is hard to imagine today, so modern and forward-looking are its streets and its people. Contemplate the decades-long recovery at the burned-out shell of the Industrial Promotion Hall and the Peace Memorial Park. Later this evening, enjoy a tour of the illuminated city by night with a stop for a dinner of okonomiyaki, Japanese soul food and sake.

Kagoshima, Japan
Situated on a scenic bay formed by a sunken caldera and overseen by the Sakurajima volcano, Kagoshima is often called the â€œNaples of the Eastern Worldâ€ for its setting. During a city tour, head to the hilltop Shiroyama Park for splendid views of the city and of Sakurajima volcano, and visit the Reimeikan museum in the old city castle to view exhibits of Japanâ€™s history and culture. If you wish, you may join a ferry to get closer to Sakurajima volcano across Kagoshima Bay.

Hong Kong, China
Witness where deeply held Eastern traditions meet modern Western sensibilities during a Hong Kong city tour that takes you up to Victoria Peak for sweeping views of the metropolis. Continue to the former fishing village of Aberdeen, now a dense and fascinating cluster of residential towers. Or perhaps youâ€™ll venture to nearby Lantau Island or visit the casino-laden port of Macau, the famous former Portuguese outpost.