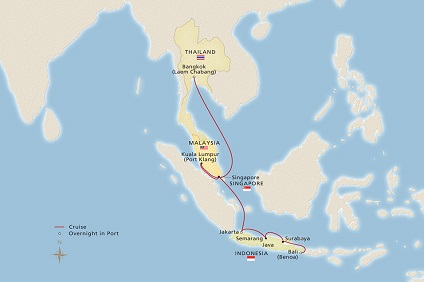 12 Night Cruise sailing from Bali to Bangkok aboard Viking Orion.

Capitals of Asian art and culture

Witness the fascinating juxtapositions of Southeast Asia, where long-held traditions infuse bustling capitals. See the floating markets of Bangkok with a Thai guide. Marvel at Kuala Lumpurâ€™s soaring Petronas Towers through a localâ€™s eyes. Absorb the vast cultural diversity of Singapore with a resident by your side. And gain unmatched insight into the spiritual and arts culture of Java, from the enormous temple of Borobudur to the historic riches of Jakarta and Surabaya.

Kuta is known internationally for its long sandy beach, varied accommodation, many restaurants and bars. Outside of Kuta visitors can visit nearby Seminyak, Sanur, Nusa Dua and further out, the quaint town of Ubud.

Attractions in Semarang include its Dutch colonial buildings, Chinese temples. The Tugu Muda and Sam Po Kong Temples and the â€˜Buiding of a Thousand Doors and Windowsâ€™. There are some interesting museums to visit including the Ronggowarsito museum and the Museum Rekor Indonesia.

Bangkok is divided into 50 districts and 154 subdistricts. In central Bangkok is the Siam Square district, a modern commercial area full of shopping malls and hotels. Sukhumvit is an exlusive district, while Silom is a primary party area by night. In Rattanakosin visitors will find â€˜Old Bangkokâ€, home to Bangkokâ€™s best known sights such as the Grand Palace and Wat Pho.