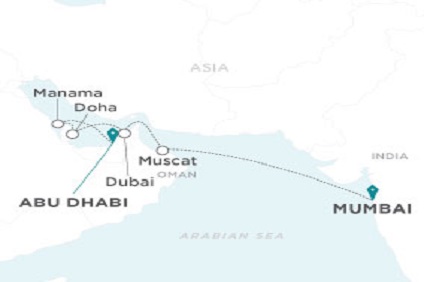 Manamah, Bahrain
The capital of Bahrain, Manama (also Manamah) offers a compelling mix of local culture and world influences. Just under one-third of the Persian-Gulf city’s residents hail from other countries, giving it an infusion of international sensibilities. The result: An abundance of chic clubs and luxury accommodations, making Manama the place to shop and dine. Chances to become immersed in the Manama of the past are readily available too, as Arab boats called dhows populate the waters, and camel rides and pearl diving excursions remain popular ways to experience traditional pursuits. As for the future, it is bright and grand, as represented by plans for the Murjan Tower, envisioned to be the world’s tallest structure.

Doha, Qatar
As home to over eighty percent of the emirate’s population, headquarters for Al Jazeera Arabic television and capital of Qatar, Doha is a cultural and political hub of the Persian Gulf. It is also a growing metropolis, with the number of residents increasing by more than 60,000 between 2004 and 2006. This expansion is attributed at least in part to changes in property laws. Expatriates, of whom there are many in Qatar, were once not permitted to own land. Now non-citizens can purchase land, which entitles them to become a part of Qatar’s thriving economy. So the rush is on, with acreage being scooped up and developed at a rate that compares to Dubai. Sheikh Hama bin Khalifa’s modernization program further fuels the building boom. One of Doha’s more impressive construction projects is the Pearl, an artificial island that covers 985 acres and house up to 30,000 residents.

Dubai, UAE
Tiny Dubai is a member of the United Arab Emirates, the cluster of prosperous sheikdoms along the Arabian Sea. Dubai grew rich on pearls and gold, but today its bread and butter is petroleum, a source of fabulous wealth. In the offshore oil fields of Dubai are three submerged oil tanks, each twenty stories tall, which locals call “The Three Pyramids of Dubai.