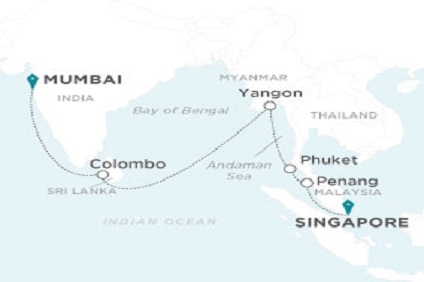 13 Night Cruise sailing from Mumbai to Singapore onboard Crystal Symphony.

Penang and Mumbai offer cultural flavors for foodies; two nights in Yangon reveal Myanmarâ€™s complex past and present and offers exploration of Bagan, and Singaporeâ€™s urban landscape sparkles with towers of international character.

Colombo, Sri Lanka
Sri Lankaâ€™s capital until recent times, this fascinating city is filled with an intriguing blend of cosmopolitan buildings and ancient temples. Enjoy the effects of Colomboâ€™s melting pot of cultures, as Portuguese, Dutch, and British trading companies from earlier times have left behind churches, monuments, religions, and costumes, as well as smatterings of their languages, that have been incorporated into the speech and daily routine of the local
Sri Lankans.

Yangon, Myanmar (Burma)
Through its decades of self-isolation, the unspoiled country of Yangon, Myanmar (formerly known as Burma) has retained its charm, fascinating traditions and the irresistible politeness of its people. The colonial capital of this timeless land is Rangoon, “Yangon” to the Burmese. Although the initial settlement dates back over 2,500 years, the city itself is not particularly old. It features few high rises, little traffic and vehicles dating from the ’50s and ’60s, all giving the visitor an impression of a town from the past.

Note: Arrival and departure times for this port will depend on tidal restrictions.

Phuket, Thailand
Residents call Phuket “The Pearl of the South,” and one visit to this green, sun-soaked island in the Andaman Sea will show you why. The coast is a succession of magnificent beaches, the forested interior boasts virgin rain forests and numerous plantations-cacao, pineapple, rubber. The culture is a distinctive blend of Portuguese, Chinese and indigenous Chao Naam, a proud seafaring people.