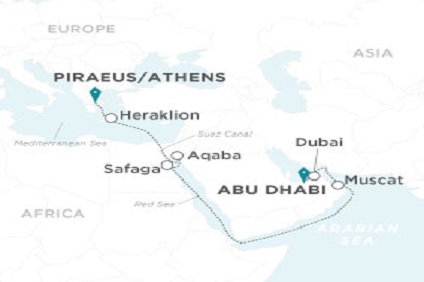 Follow the adventures of Lawrence of Arabia on a journey to Wadi Rum, and see the Pink City of Petra. Venture to Luxor and the Valley of Kings on a quest to see King Tutâ€™s tomb and witness the marvels of Dubai and Abu Dhabi.

Athens (Piraeus)
Piraeus is Greece’s largest port and has been a gateway to the Mediterranean since 482 BC. It lies on the innermost point of the Saronic Gulf and is a short drive from Athens, the cradle of Western democracy and culture. Throughout the ages, Athens’ lofty Acropolis has been a source of inspiration. The ancient ruins scattered throughout this legendary city are reminders of Greece’s great cultural heritage.

Iraklion, Crete
The largest city and capital of Crete, and the fourth-largest city in Greece, Heraklion (also known as Iraklion) makes a convenient base for island explorations. Nearby are the ruins of Knossos, an ancient Minoan city that was destroyed by a tsunami resulting from volcanic eruption in Santorini. Phaistos in southern Crete and the ancient town of Gortyn are also within reach. These old sites reveal Creteâ€™s the culture of a wealthy society that gradually disappeared due to wars or natural disasters. Iraklion itself merits a leisurely discovery, with remnants of its fascinating past, including the well-preserved Venetian fortress the remains of the defensive wall, on display.

Aqaba, Jordan
The waterway to the Red Sea – the commercial sea port of Aqaba (Al ‘Aqabah) is the only outlet to the Hashimate Kingdom of Jordan, and is situated at the top of the Gulf of Aqaba. Aqaba brings a refreshing release from the rose-coloured desert to the North. Its sandy beaches and coral reefs are the most pristine on the Red Sea, and Jordanians hope to preserve them through careful planning. With several first-rate hotels, restaurants and shops, Aqaba caters to a tourist crowd that is tranquil and relaxed, seeking its pleasures more by day than by night.

Luxor & Karnak / Safaga, Egypt
This small city on the coast of the Red Sea offers beautiful beaches and temperate weather, combined with scuba diving, surfing, and snorkeling. The resorts of this area provide perfect opportunities for visitors to enjoy all the amenities of comfort, while simultaneously basking in the relaxing sun of such a unique and tantalizing area.