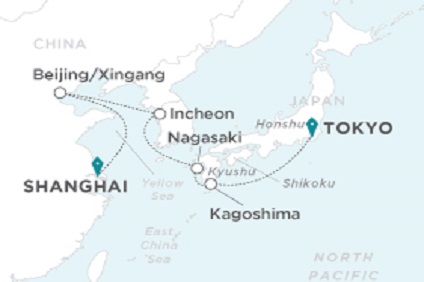 12 Night Cruise sailing from Tokyo to Shanghai aboard Crystal Serenity.

Mount Sukurajima commands the horizon over Kagoshima as Peace Park inspires serenity in Nagasaki; enjoy three days in Beijing to explore the Forbidden City, the Great Wall and more, and an overnight in Shanghai to see the Jade Buddha.

Tokyo
Fusing the vitality of a modern metropolis with the stately elegance of yesteryear, Tokyo is truly unique. From the timeless beauty of the Meiji Shrine to the glittering Ginza district and impressive Tokyo Tower, this international giant is a complex blend of East and West. Houses of wood and paper stand beside towering steel skyscrapers, while kimono-clad women stroll beside teenagers who have created a fashion all their own.

The timeless Imperial Palace bears testament to Japan’s enduring traditions. Despite encroaching urban development, it continues to exist in a verdant parkland of isolation.

Images of the vibrant metropolis of Tokyo, which is home to more than 11 million people, will create memories of a lifetime.

Incheon
Incheon (or Inchon) is rising to new heights, literally. An industrial city west of Seoul, Incheon is developing metropolitan real estate with dramatic results, including a district called Songdo International City, where the world’s tallest twin tower buildings, 151 Incheon Tower, are under construction. The area already is home to South Korea’s tallest building, the North Asia Trade Tower. Songdo is targeted for completion in 2015 and will be South Korea’s most expensive real estate investment to date. In the meantime, there is much to be discovered. Independence Memorial Hall is home to the monument commemorating General MacArthur, who led U.S. forces in the Inchon Landing that turned the tide of the Korean War. The Wolmido area boasts a small park and picturesque ocean views. Farther afield are the Incheon Islands, favorite destinations for hikers and beachgoers.

Shanghai
Shanghai, located just inside the mouth of the great Yangtze River, marks the point where Asia’s longest and most important river completes its 3,400-mile journey to the Pacific. The city’s unique location is the source of its existence and has determined what it is today. Until 1842, Shanghai was merely a tiny fishing village. Following the first Opium War, Shanghai became a treaty port, which opened the city to foreign influence and resulted in the development of numerous British, French and American colonial settlements within the city and along the Yangtze River. Today, Shanghai is the center of China’s economic resurgence and its skyline attests to this development in the form of towering skyscrapers, brightly lit commercial high-rises and the unsettling Oriental Pearl Tower. A testimony to Shanghai’s colonial era, stately European buildings in art deco style line the Bund, the city’s spacious waterfront promenade. An endless flotilla of sampans edge the Huangpu River, dividing old and new Shanghai. Beyond the rush of the city, serene ponds and gardens offer a gentle respite. Must-see sights include the Jade Buddha Temple and tranquil Yu Garden, impressive monuments to China’s history and style. Inland lies Suzhou, with its majestic Grand Canal and classical gardens, as well as equally significant Hangzhou, terminus of the Grand Canal and the center of China’s legendary tea industry.