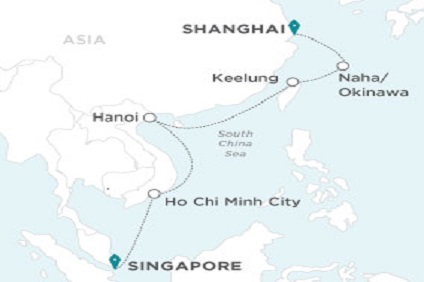 14 Night Cruise sailing from Shanghai to Singapore aboard Crystal Serenity.

Shanghai
Shanghai, located just inside the mouth of the great Yangtze River, marks the point where Asia’s longest and most important river completes its 3,400-mile journey to the Pacific. The city’s unique location is the source of its existence and has determined what it is today. Until 1842, Shanghai was merely a tiny fishing village. Following the first Opium War, Shanghai became a treaty port, which opened the city to foreign influence and resulted in the development of numerous British, French and American colonial settlements within the city and along the Yangtze River. Today, Shanghai is the center of China’s economic resurgence and its skyline attests to this development in the form of towering skyscrapers, brightly lit commercial high-rises and the unsettling Oriental Pearl Tower. A testimony to Shanghai’s colonial era, stately European buildings in art deco style line the Bund, the city’s spacious waterfront promenade. An endless flotilla of sampans edge the Huangpu River, dividing old and new Shanghai. Beyond the rush of the city, serene ponds and gardens offer a gentle respite. Must-see sights include the Jade Buddha Temple and tranquil Yu Garden, impressive monuments to China’s history and style. Inland lies Suzhou, with its majestic Grand Canal and classical gardens, as well as equally significant Hangzhou, terminus of the Grand Canal and the center of China’s legendary tea industry.

Keelung
Across the Formosa Straits from Mainland China lies the island of Taiwan, whose name means “Terraced Bay.” Taipei lies just 20 miles from our pier in Keelung. It is Taiwan’s largest city and stands on the island’s northern tip, where the Tamsui and Keelung Rivers meet. Since becoming the capital of the Taiwanese Republic of China, its population has mushroomed to approximately three million people. That momentum continues today, making this cultural and economic center one of Asia’s fastest growing cities. Taiwan is a land of contrasts, from its bustling urban areas to its serene countryside. Explore numerous sites of interest including 19th-century city gates and walls, the Chiang Kai-Shek Memorial Hall, the Sun Yat-sen Memorial and the famous Grand Hotel.

Hanoi
“In Singapore, at Saigon, one exists; at Hanoi, one lives.”-Joleaud-Barral, French geographer. One of the great natural wonders of Asia, the natural beauty of Ha Long Bay, or the “Bay of the Descending Dragon,” is outstanding. Speckled with over 3,000 karst mountains bursting from the calm water, is Ha Long Bay. Local myths hold that when the forefathers of the land were fighting foreign invaders from the north, the gods from heaven sent a family of dragons to help defend their land. The dragons descended upon what is now Ha Long Bay and began spitting out jewels and jade, which turned into islands and islets upon hitting the sea. The islands functioned as natural barriers against the invaders and the local people survived and vowed eternal honor to the dragon’s mercy. Not only is Ha Long Bay’s landscape spectacular, but Vietnam’s capital city, Hanoi, is easily within reach. Hanoi lies in sometimes stark contrast with its southern sister city. While in Saigon, one sees Vietnam’s future; in Hanoi, one sees its past. In a city with a population of 2.6 million people and approximately 2 million motorbikes, the downtown intersections represent a free-for-all between pedestrians and cyclists. Surprisingly, Hanoians aren’t rushed and scrambling as are the Saigonese. Instead, they stroll and linger, converse and reflect. Old-fashioned in style, Hanoi is a city of lakes and parks, tree-lined, bicycle-filled boulevards, elegant colonial mansions and villas, all of which testify of its French legacy. Venturing into the city is a must and will provide you with a microcosm of Vietnamese culture and a truly memorable experience. Enjoy your adventures ashore!