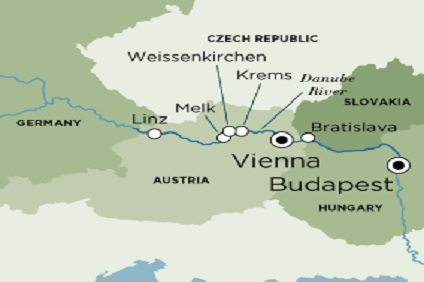 7 Night Cruise sailing from Budapest to Vienna aboard Crystal Ravel.

Sail the magnificent Danube to witness the beauty of the Wachau Valley, and discover such treasures as the Benedictine abbey perched atop the city of Melk and Bratislava’s St. Martin’s Cathedral, former coronation church for Hungary’s royalty.

Budapest
Cast your eye over the Budapest skyline, and youâ€™ll see all the makings of a world-class city and striking photograph: domes and spires, bridges and lampposts, splendid architecture in the foreground, rolling hills in the back, and the Danube River placidly curving through it, providing a reflective surface for sunsets and city lights. Look closer, and the treasures of Budapestâ€”Hungaryâ€™s capital and the largest metropolisâ€”really come to light. Castle Hill is at the top of most visitorsâ€™ lists, a UNESCO-listed district hosting Buda Castle, Trinity Square, Matthias Church and Fishermenâ€™s Bastion. The area is also residential, with 18th-century houses, cobblestone streets and few cars, thanks to a strict vehicular ordinance, giving you a real sense of what the city must have been like ages ago. Budapest is full of history, originally a Roman settlement, formed as a unified city when Buda and Pest joined in 1873, overtaken by various invading forces over the centuries, and today an interesting goulash of local culture and foreign influences. Take a seat in a Turkish-era bath or savor rich EsterhÃ¡zy torte in a genteel coffee house to experience the many sides of a city that charms from both sides of the Danube.

Bratislava
Slovakiaâ€™s capital city may be the countryâ€™s buzzing political and economic center, but it is also a historic gem that stirs the imagination. A maze of narrow, cobblestone streets wind around colorful 18th-century buildings, and shade-covered sidewalk cafes beckon wearyâ€”or simply hungryâ€”travelers to linger over a meal and enjoy people watching. Museums, cathedrals and palaces are edifying locales to spend some time, while photography buffs will want to snap images of the medieval castle that looms over the city with a majestic grace. For those looking for more contemporary sights, Bratislava boasts a pulsating modern art scene, as well as some outstanding examples of Communist-era architecture.

Melk
Best known for its fortified baroque Benedictine monastery, Melk Abbey, the town of Melk boasts an assortment of smaller gems. Among them, the cityâ€™s riverside location, serene and regal with a ribbon of wooded groves giving way to the lovely village. Cobbled lanes and a petite size make for a pleasant stroll with a chance to discover its 16th-century Town Hall, or Rathaus, in the center of town, and Haus am Stein, or House at the Rock. Built in the 15th century, the vine-covered abode is Melkâ€™s oldest building.

Linz
Named the European Capital of Culture in 2009 and added to the roster of UNESCO Creative Cities as a City of Media Arts in 2014, Linz embraces the present and future, even as it remains reverential to its past. There is much to be proud of: Here on the gentle curve of the Danube, Linz rose to power as a political and economic hub for the Holy Roman Empire. Trade and influence extended in all four directions, from Hungary and Germany to the east and west and Poland and Italy to the north and south. Later, Linz sparkled as a city of the Habsburgs, the last home to German Emperor, Friedrich III. The cityâ€™s layout reflects its history, with an ancient medieval center encircled by neoclassical, neo-baroque and neo-Renaissance neighborhoods, a kind of tree-rings of age and architectural styles. Highpoints of old traditions and impressive landmarks include the Linzer torte, dating to 1653 and thought to be the oldest cake in the world, and St. Martinâ€™s church, the oldest church in Austria.