*The veranda railings on Deck 5 are part metal and part glass from floor to teak rail. Suites on Deck 5 have slightly larger verandas. Wheelchair accessible suites are roll-in shower only. 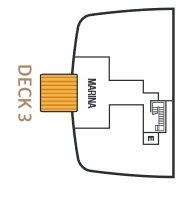 Introducing Seabourn Ovation, the sister-ship to the already prestigious Seabourn Encore. Seabourn Ovation represents another welcome stage in the evolution of small-ship cruising, which Seabourn pioneered and has consistently expanded and enriched. Both ships will deliver a wealth of new concepts, a fresh vision and a host of illuminating ideas to delight the world’s most discerning travelers. 21 Night Cruise sailing from Athens to Istanbul onboard Seabourn Ovation.

Re-Defining Ultra-Luxury Cruising…Again. As Seabourn celebrates 30 years of enriching and enhancing ultra-luxury cruising, we’re proud to introduce the next stage of our evolution. We welcome Seabourn Ovation, sister ship to the already renowned Seabourn Encore. Her arrival has crowned a fleet that is already the newest, most modern and most acclaimed at sea and will deliver a wealth of new concepts, a fresh design vision and a host of illuminating ideas to delight the world’s most discerning travelers.

As with Seabourn Encore and Seabourn Ovation, Seabourn enlisted the participation of master designer Adam D. Tihany. Recognized as one of the preeminent designers in the world, Tihany specializes in developing elegantly individual spaces for the most highly rated restaurants, hotels, resorts and spas in the hospitality industry. He is also renowned for his unique ability to realize and embody the particular personalities of his clients and the preferences of their clientele in his designs.

Athens, Greece
The port of Piraeus is one of the last old-style Mediterranean ports from where you can catch ferries to all of the Greek islands and travel a short distance to Greece’s capital city Athens. In the heart of the city lies the ancient Plaka district, with its honeycomb of streets, little shops – and tavernas that come alive at night. Situated on the north and east slopes of the Acropolis, it is rich with historic sites, such as ancient monuments and churches. Within Athens there are eight large hills, including the Acropolis, and on the outskirts, Mount Parnitha, Mount Pendeli and Mount Hymettos surround the city. A trip to Athens’ most famous tourist attraction, the impressive Parthenon built on the Acropolis around 2,500 years ago, will be memorable to say the least. There are an extraordinary number of historic tourist sights in Athens and many of these are known world-wide. Some of the top Athens attractions include the Agora – a grand, ruined Roman building, Hadrian’s Arch – originally the city gate linking the Roman quarters with original town of Athens and the stunning Dionysos Theatre – the world’s oldest theatre where many great plays have been performed over the years.

Katakolon (Olympia), Greece
The small commercial port of Katakolon serves the inland town of Pyrgos as chief export center for grapes, raisins, regional fruits and vegetables that grow in the fertile hinterland. Fifteen miles in the distance lies Olympia, the sacred ancient site where the Olympic Games had their beginnings.

Dubrovnik, Croatia
Founded in the 7th century, Dubrovnik rose to greatness as a merchant state, independent republic and cultural crossroads. The traffic-free Old Town has been called a Croatian Athens. This UNESCO designated World Heritage Site is a living museum of the ages with fortifications, chapels, monastic cloisters and Europe’s second-oldest synagogue crowded into its ancient walls. Relax at a sidewalk café, listen to the chimes of the 14th-century bell tower or join the promenade down the palace-lined avenue known as the Stradun.

Zadar, Croatia
Located in central Dalmatia Zadar is one of the Adriatic’s most historically interesting towns with a wealth of sightseeing and exciting nightlife. Zadar was founded by the Romans, attacked by the Turks, ruled by the Austrians and made part of Italy until 1943 when the Germans moved in. Allied bombing destroyed much of the historic centre which was rebuilt after the war only to suffer more attacks by Yugoslav forces in 1991. In recent years Zadar has undergone a startling revival. Cafes and bars are filled, museums and churches have been restored and tourists pour in to take boats to nearby islands.

Venice, Italy
The first settlement of the marshy islands in the lagoon was for protection from barbarian tribes that terrorized mainland farms and villages. Island living quickly led to the development of skills in handling boats, then ships. Maritime trade conducted by shrewd merchants brought great wealth, which permitted the building of palaces, churches and monuments. The city became the center of the vast Venetian empire, its name forever summoning visions of grandeur, magnificence, richness, graciousness and beauty. Although later linked to the mainland, first by a railway bridge built in 1848 and then by a motor causeway in 1930, this island city will always be considered the “Queen of the Sea.” There are no cars in Venice; all transportation is by boat or on foot along the time-worn, cobblestone streets and across some 400 bridges that span the city’s 177 canals. Enchanting Venice truly offers an atmosphere that exists nowhere else.

Kotor, Montenegro
One of the best preserved medieval towns of the Adriatic, Kotor is protected by UNESCO. Between 1420 and 1797, the area was under the rule of the Republic of Venice and the Venetian influence can be seen in its architecture. The Gulf of Kotor is sometimes called the southernmost fjord in Europe, although it is actually a submerged river canyon. The overhanging limestone cliffs of Orjen and Lovcen complete one of the Mediterranean’s most beautiful landscapes.

Zakinthos, Greece
The third largest of the Ionian Isles, Zakinthos is most famous for its isolated “Shipwreck Beach,” accessible only by boat. The shining white pebble beach ignites the turquoise color of the sea, as it does in the numerous small caves around Cape Skinari, again only seen from a small boat. Between Skinari and the mountain village of Keri are fantastic rock arches and other bizarre formations. The town is curved around a large harbor, and guarded by an old Venetian castle with panoramic views of the town and harbor.

Nafplion, Greece
Held to be one of the loveliest small towns in all the islands, Navplion has a tradition and culture all its own. The sheltered location, below a rocky headland crowned by a Venetian fortress is perhaps unrivaled in Greece. After the Greek revolution of the early 19th century, Navplion served as the first modern capital. The neoclassical houses, large official buildings and carefully planned seafront streets all date from this period.

Agios Nikolaos, Crete, Greece
This charming village of white houses climbing up the slopes is beautifully situated on the sparkling Gulf of Mirabello. The attractive Venetian harbor is surrounded by restaurants, outdoor cafes and clusters of shops selling everything from necessities to souvenirs. The ship docks in the center of town, and you are able to wander at will and enjoy the atmosphere of Crete’s foremost resort.

Kusadasi (Ephesus), Turkey
Kusadasi, which means “bird island,” is set in a superb gulf known for its sparkling water, broad sandy beaches and large marina. The city has managed to retain a certain earthiness while doing a brisk trade in Turkish carpets and leather goods to visitors. The town’s old quarter is a picturesque maze of winding streets and houses adorned with flowers and birdcages. In the center stands a 17th-century caravanserai, now converted into a hotel. The resort is also gateway to important sites of archaeological and religious interest.

Mykonos, Greece
The quintessential Greek island of Mykonos is marked by whitewashed houses, domed churches, imposing windmills, and a labyrinth of winding streets designed to disorient pirates. Everywhere there is a dash of bright, bold blue – doors, shutters and window frames, sea and sky. The harbor bustles with colorful fishing boats, vendors selling fish and locals gathered with visitors in the casual seaside cafes. The port even comes with two beloved mascots, the pelicans Petros and Irini.

Istanbul, Turkey
Spanning Europe and Asia, exotic Istanbul is one of the world’s most fascinating cities. Domes and minarets enhance the skyline. In the old Stamboul area, traces remain of every city built since the community was established over 600 years before Christ. Once Rome’s eastern capital, Istanbul was also the center of the huge Ottoman Empire. Landmarks include Hagia Sophia, once Christendom’s greatest church; the Blue Mosque with its striking Iznik tiles; Topkapi Palace, containing a sultan’s ransom of treasures; Chora Church with its Byzantine mosaics; and the Grand Bazaar, the ultimate shopping experience.