Cat 01 #B01-B06: These spacious cabins have a mix of queen beds or two single beds, a large window and a shower.

Cat 02 #C01-C10: These spacious cabins have a mix of queen beds or two single beds, a large window and a shower.

Cat 03 #D03-D04:These spacious cabins have two single beds (which can be pushed together), a large window and a shower.

Cat 04 #D01-D02: These very large suites have an
adjoining seating area, a queen-size bed, large windows that
open, a shower and a bathtub.

Cat 05 #D05-D06: These very large suites have a queen-size bed, side and stern-facing windows that open, a shower and a bathtub. Each has a large private outdoor terrace with private spa tub.

The Oberoi Philae originally began service in 1996, configured at the time with 50 cabins and maximum capacity of 100 guests. A multiyear renovation completed in 2015 converted her into an extraordinarily beautiful and private Nile cruise ship, with just 22 cabins and accommodations for 42 guests, modern amenities, and a relaxed, elegant ambiance.

Her 22 cabins, including 4 suites, are large and comfortable, with ample space for storage. Bathrooms are large too. Windows are nearly floor to ceiling and slide open, offering idyllic views of the Nile and the passing scenery. The topmost deck has a swimming pool that is among the largest of any Nile ship, and an al fresco restaurant where lunch is served, weather permitting. Downstairs, there’s a stylish enclosed restaurant as well. A spa and a professional wellness specialist add an extra level of amenity and comfort. The lounge is the venue for talks and recaps, and there are a number of other public spaces for you to discover—to relax, read, and enjoy the views. 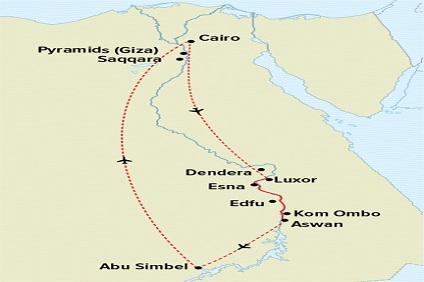 DAY 1: Cairo
Arrive in Cairo and make your way to the Nile Ritz-Carlton, your home for the next two nights. The hotel has a prime location along the Nile in the heart of this great city, and your room will face the Nile (with the Pyramids visible in the distance, weather permitting).

DAY 2: Cairo
This morning, you will tour the Egyptian Museum, which holds an almost endless collection of some of the greatest masterpieces ever crafted, including the treasures of Tutankhamun, the brightly painted limestone sculptures of Prince Rahotep and Princess Nofret, and the bizarre relief of Akhenaten. Youâ€™ll also see mummies of some of Egyptâ€™s pharaohs.

Lunch is included at a local restaurant. This afternoon, explore Old Cairo, founded by the Romans long before the modern city arose. Itâ€™s known for its Coptic churches, including the 4th century â€œHanging Churchâ€ and the Church of Abu Serga, which stands on the spot where the Holy Family is said to have rested. Then stroll through winding streets to the 1000-year-old Ben Ezra Synagogue.

This evening, weâ€™ll have festive welcome drinks and dinner at our hotel. (B,L,D)

DAY 3: Luxor
This morning, we board our private charter flight to Luxor, in Upper Egypt. Youâ€™ll then visit Karnak Temple, where for 2,000 years some 30 pharaohs added their own monuments and shrines. Karnakâ€™s scale is vast. The 134 columns of the great hall create a forest of stone 70 feet high, while the towering obelisk of Queen Hatshepsut shadows the rear of the temple. The reliefs and carvings, created by some of Ancient Egyptâ€™s finest artisans, are dramatic.

Weâ€™ll then embark Oberoi Philae, our home for the next six nights, in time for lunch.

This afternoon we explore exquisite Luxor Temple, on the banks of the Nile. The temple is guarded by massive statues of Ramses II, and has magnificent pylons, columns and statues. It has been a place of worship for millennia, as attested to by the mosque that was built atop the site. In the late afternoon, we continue to the Luxor Museum, which contains some of Egyptâ€™s finest statuary, beautifully lit and displayed. We return to our ship for the evening. (B,L,D)

DAY 4: Luxor
This morning weâ€™ll explore Luxorâ€™s fabled West Bank. After stopping to see the Colossus of Memnon, we travel through the desert to the Valley of the Kings. For four centuries, this area served as the burial ground for Egyptâ€™s greatest pharaohs. Although not all the tombs are always open, there will be many to choose from, including those of Tutankhamon and Seti I (which require special permits, which we will obtain for you). We continue to the Ramesseum, the mortuary temple of Ramses II, whose toppled statue inspired Shelleyâ€™s poem Ozymandias.

We have lunch at a restaurant on Luxorâ€™s West Bank, then continue our explorations. We’ve made special arrangements to visit one of the most remarkable tombs of all: that of Nefertari, located in the Valley of the Queens. The tomb paintings are in vivid colors, show Nefertariâ€™s beauty, and depict her journey to the afterlife. After our visit weâ€™ll continue to the temple of Queen Hatshepsut, which lies in a dramatic setting beneath sandstone cliffs, and which contains wonderful interior reliefs that tell the story of the Queenâ€™s expedition to the land of Punt. (B,L,D)

DAY 5: Dendera/Sailing the Nile
This morning we drive northward to visit the beautifully preserved temple of Dendera. It was constructed during the time of the Roman emperors, and the reliefs on the temple walls depict the empress Cleopatra. Also of note are the dramatic columns topped with images of the cow-headed goddess of love, Hathor.

We return to Luxor and in the afternoon sail south to Esna, transiting the Esna Lock. Life along the banks of the Nile is very much in the traditional manner, and weâ€™re afforded a glimpse into Egyptian life through the centuries. (B,L,D)

DAY 6: Esna/Sailing the Nile/Edfu
This morning we visit Temple of Khnum at Esna. The part we can explore is small, in contrast to many of the other sites we visit, since much of the temple complex lies beneath the contemporary town of Esna and has not been excavated. The base of the temple sits well below street level, showing how much silt was deposited by the Nileâ€™s annual floods. Weâ€™ll also explore the town of Esna on foot, to get a glimpse of small-town life in Egypt.

We continue sailing southward to the town of Edfu, and in the late afternoon visit Edfu Temple to view whatâ€™s considered to be the best-preserved monument of the Ancient World: the temple of Horus, the falcon god. Because the roof is intact, the play of light and shadow is much as it must have been during Ptolemaic times. The art and architecture here are extraordinary, and the statue of the god Horus as a falcon is iconic. (B,L,D)

DAY 7: Sailing the Nile/Kom Ombo
This morning we sail to Kom Ombo, strikingly set atop a hill overlooking the Nile. Built during the Ptolemaic era, it is unique in being dedicated to two godsâ€”hawk-headed Haroeris and crocodile-headed Sobek. It is richly decorated, and even has a hieroglyphic calendar. We then return to our ship and sail on towards Aswan. (B,L,D)

DAY 8: Aswan
Aswan occupies a glorious location on the Nile, backed by hills, with granite rocks protruding from the riverbed and sailboats (called feluccas) plying the water. It is just downstream of the northernmost Nile cataract, which historically made it a frontier town and a center for trading with Nubia. This morning we visit the lovely temple of Philae, located on an island in the river and dedicated to the goddess Isis, and the quarries where the famous pink granite was mined, where there is an unfinished obelisk from ancient times. Weâ€™ll also visit the fine Nubian Museum This afternoon, youâ€™ll have high tea at the legendary Old Cataract Hotel, whose view of the Nile cataract is extraordinary, and sail on a felucca (traditional sailboat). This evening, weâ€™ll have a farewell dinner aboard Oberoi Philae. (B,L,D)

DAY 9: Abu Simbel/Cairo
This morning we stop at the Aswan High Dam, then take a private charter flight to Abu Simbel, where we visit the two great temples built by Ramses II. When the Nile was dammed at Aswan, the temples were disassembled and moved, block by massive block, to higher ground. Our aircraft waits for us, and we take our private flight to Cairo and transfer to the Mena House Hotel, located at the foot of the Pyramids. The Mena House was originally built in 1869 as a hunting lodge for the Khedive Ismail, and also accommodated guests at the opening of the Suez Canal. We’ve reserved rooms where youâ€™ll have a view of the Pyramids from your balcony. The rest of the day will be free to explore the pyramids independently, shop, or relax by the pool. Dinner is at the hotel. (B,L,D)

DAY 10: Saqqara, Pyramids, & the Sphinx
This morning, we visit Saqqara to see the Step Pyramid of the pharaoh Zoser, a revolutionary design that initiated the art of pyramid-building. We will also see some of Egyptâ€™s most charming wall paintings and reliefs, showing scenes of harvesting, fishing, music making and dancing.

After lunch, we explore the Pyramids and Sphinx. Among the seven wonders of the ancient world, only the Pyramids of Giza have survived. The magnificent Pyramid of Cheops was built from over two million blocks of stone and took tens of thousands of workers twenty years to build. Nearby is the great Sphinx, carved out of a single massive piece of stone, showing the Pharaoh Chefrenâ€™s head on the body of a lion. Youâ€™ll have the chance to go inside the Great Pyramid, following the narrow passageway of the Grand Gallery to the burial chamber of Cheops. Weâ€™ll see the Solar Boat, built about 2500 BC and rediscovered in 1954, and you’ll have the chance to ride a camel if you wish.

Tonight we return to the Pyramids for the renowned Sound & Light show. As lights and shadows play on these great monuments, the narrative recounts their history. Dinner this evening will be on your own. The Mena House has several excellent restaurants to choose from, or you may go out if you wish. (B,L)

DAY 11: Cairo
Cairo is a treasure trove of great Islamic architecture and art, and this morning youâ€™ll explore some of its greatest monuments, including the Ottoman-era Muhammad Ali Mosque, completed in 1848. It occupies a commanding position overlooking Cairo from atop the Citadel, and its five domes can be seen throughout the city. Continue to the elegant Ibn Tulun Mosque, which dates originally from 879 and which has preserved much of its original design. Then visit one of Cairoâ€™s jewels: the Gayer-Anderson Museum, a house built in the 16th and 17th centuries that between 1935 and 1942 was the home of a British military officer who collected furniture, carpets and other objects. We have lunch at a local restaurant, them explore the Khan el Khalili bazaar, a maze of streets with thousands of shops selling everything from filigreed silverwork to camel saddles! This evening we gather for a farewell reception, followed by dinner at the Mena House. (B,L,D)