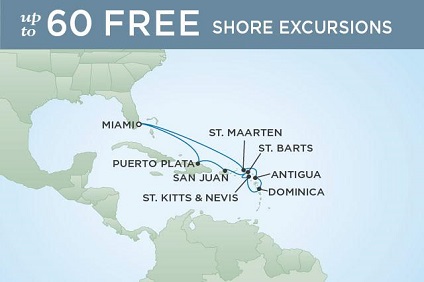 The intimate atmosphere of Seven Seas NavigatorÂ® is accompanied by her beautiful style and luxury, from the gorgeous teak pool deck to the superb offerings of Prime 7.

The elegant design of Seven Seas NavigatorÂ® harmonizes beautifully with the feeling of ease you experience when welcomed on board with kindness and grace. From stem to stern, the ship is staffed with a crew that has mastered exceptional service, exquisite cuisine and effortless luxury.

Puerto Plata, Dominican Republic
There is plenty of local color in Puerto Plata. The city was founded around 1500 and given its name â€“ which means â€œsilver portâ€ â€“ by Christopher Columbus, who thought the clouds hiding the nearby mountaintop had a silvery appearance. Also identified by its hue, the main public beach is called Playa Dorada, or Golden Beach, after the color of its sun-kissed sand. If you spend some time there, youâ€™ll find itâ€™s a great place to bronze yourself. Or you can head into town to the Museo del Ãmbar to see more shades of amber than you probably knew existed. Be sure to bring your green, as you can buy jewelry there too.

Roseau, Dominica
Roseau, a small town with plenty of colonial charm, offers the colorful New Market, where you can stop for a refreshing coconut drink. Dominicaâ€™s real beauty lies in its unspoiled natural landscape – the dense rain forests, lush foliage, natural springs and rivers and tall, smoldering peaks. Dominica is home to one of the Caribbeanâ€™s great natural wonders-the scenic Valley of Desolation, where in a verdant tropical gorge, white mists from bubbling hot springs swirl in the air.

St. Johns, Antigua
Touting 365 beaches, most protected by coral reefs; a ring of forts; and quaint Colonial architecture, Antigua, and particularly St. Johnâ€™s, is a classic example of the British Caribbean. Sites to see include St. Johnâ€™s Cathedral, destroyed by earthquakes and rebuilt on the same spot at least three times, the last time in 1845; and the Museum of Antigua & Barbuda, which, in addition to island history, also offers a fascinating exhibition of semiprecious stones. For a stroll in nature, make your way to Nelsonâ€™s Dockyard National Park, or the nature trail to Shirley Heights. St. Johnâ€™s offers several hot spots for nightlife and live music. And be sure to stop at a local restaurant to taste the buttery â€œflying fish,â€ unique to this part of the Caribbean.

Philipsburg, St Maarten
St. Maarten is the smallest piece of land shared by two sovereign states. Legend has it that the Dutch and French boundaries of the island were determined by two men who challenged one another in a race around the island, with the Frenchman walking faster and claiming more land. Legend or not, both the Dutch and French settled here in the 1630s and despite occupancy by the British twice, the Dutch and French have lived peacefully together ever since they arrived.