Navigator, South For The Summer ex Amsterdam to Barcelona – 05 Aug 2021 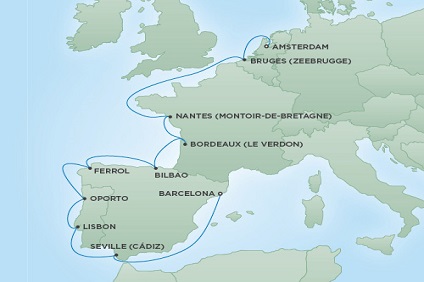 Amsterdam, Netherlands
As capital cities go, Amsterdam is small in comparison. It has a reputation for free-spirited and very liberal lifestyles. Some might call it Europe’s most “radical” city, but one cannot deny the beauty of Amsterdam and its rich history. Amsterdam is a cultural center of Europe, as exemplified in its more than 140 art galleries and 40 museums. In addition, it is famous for its baroque architecture, canals, and cobblestone streets where the favored mode of transportation is the bicycle.

Bruges (Zeebrugge), Belgium
Zeebrugge is the gateway to Bruges, the capital of the Belgian province of West Flanders. Bruges was a wealthy city during medieval times when trade with Baltic ports flourished. The Zwin River, connecting Bruges with the North Sea, slowly began to narrow, marking the end of the city’s great trade period. Today, visitors flock to Bruges to enjoy the charming, well-preserved medieval architecture lining the old and narrow roads and canals and to see some of Western Europe’s finest artistic masterpieces.

Bordeaux, France
Bordeaux is located near the European Atlantic coast, in the north of the Aquitaine region in France. The city is built on a bend of the river Garonne, with the city literally divided into two parts. The world’s wine capital, Bordeaux has about 60 appellations, 9,000 wine-producing chÃ¢teaux, and 13,000 grape growers. With an annual production of over 700 million bottles, Bordeaux produces large quantities of everyday wine as well as the most expensive ones.

Bilbao, Spain
Bilbao straddles the Bilbao or NerviÃ³n River some 15 miles from the Cantabrian Seacoast. An industrial city, the metropolitan area ranks among Spain’s most important commercial and financial centers. Proximity to the sea and early discovery of vast mineral deposits led to the development of the port. The modern city center is El Ensanche (literally “the expansion”). Possibly the newest source of great local pride is the remarkable Guggenheim Museum-Bilbao.

Lisbon, Portugal
Legend states that Ulysses founded Lisbon, calling it Olisipo. Others claim that the name is Phoenician, but all agree itâ€™s one of Europeâ€™s most fascinating destinations. On All Saintsâ€™ Day in 1755 a devastating earthquake destroyed much of the city. The Baixa (Lower City) was rebuilt on neo-classical lines that still form the heart of the city. The elegant â€˜City of Explorersâ€™overlooks the River Tagus, and offers a number of distinctive neighborhoods to discover. Tour the Alfama, where the winding streets still retain much of their Moorish atmosphere. Stroll to Bairro Alto and hear the melodious sounds of Portugalâ€™s Fado music. Nearby excursions transport you to the lavish 18th-century palace of Queluz and Sintraâ€™s Royal Palace.

Seville (Cadiz), Spain
CÃ¡diz, Andalusia’s world-renowned capital, has undergone major restoration in recent years. Palm trees, gracious squares, flower-filled parks, ubiquitous red-tile roofed buildings, and bustling street markets make this a most delightful port. The old town, on the tip of the peninsula, is buzzing with beautiful, lively plazas. To get there, you pass through the new town, an elegant metropolis with excellent beaches. CÃ¡diz is also a good starting point for a day trip to nearby Seville, where you can visit the Alcazar, a beautiful medieval Islamic palace showcasing a unique fusion of Christian and Moorish architecture surrounded by lovely gardens; majestic Seville Cathedral (Catedral de Sevilla); and Giralda Tower, offering excellent photo opportunities.