The Owner’s suite is situated on Deck 6. It has been decorated by French interior designers and will provide you with a breathtakting panoramic sea view.

As the first ship in a new series that remains true to the Ponant spirit, Le Lapérouse will embody the unique atmosphere that is the cruise line’s hallmark: a subtle blend of refinement, intimacy and comfort.

Aboard this ship that flies the French flag, you will experience the incomparable pleasure of an intimate cruise, with the possibility of exploring an ever-increasing range of destinations in an ethnic-chic ambiance with 5-star service. 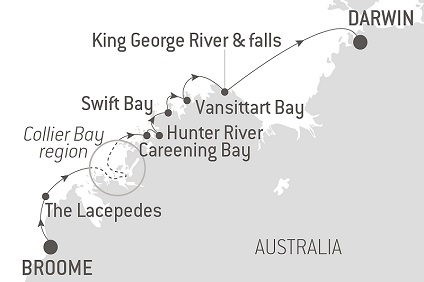 10 Night Cruise sailing from Broome to Darwin aboard Le Soleal.

Set sail for the wild and grandiose landscapes of the Kimberley, following this exceptional PONANT itinerary.

From Broome to Darwin, embark for an 11-day expedition cruise.

In one of the most picturesque parts of the region, the Hunter River, you will see wild mangrove forests where saltwater crocodiles live along with many species of birds.

The highpoint of this cruise will undoubtedly be the discovery of the King George River and the majestic Twin Falls, the highest single drop waterfall in Western Australia.

You will also visit Collier Bay, where you will be able to admire a spectacular example of the impact of the tides cascading in mini-waterfalls as the entire Montgomery reef appears to rise from the turquoise-blue waters of the bay.

Your ship will take you along one of the most spectacular coasts in the entire region.

With their falls, abrupt gorges, savannah, and calm waters, the wild lands of Kimberley are the promise of an exceptional adventure.

Broome
Located in the northwest of the Kimberley region and in the far north of Western Australia, the town of Broome is reputed for its history and its glorious pearling era. The fascinating Chinatown district, which is the historic city centre, and the famous Japanese Cemetery, dates back to 1896, and has a past marked by the immigration of numerous Chinese and Japanese workers, attracted by the prosperous pearl industry at the end of the 19th century and at the beginning of the 20th century. Broome is also famous for the â€œStaircase to the Moonâ€, an optical illusion created by the Moon reflecting on the sand banks at low tide, like a staircase climbing up towards the sky, a unique spectacle provided by natureâ€¦

Careening Bay
Careening Bay was named by Lieutenant Phillip Parker King after his ship, HMC Mermaid, was careened there during his third voyage of discovery in 1820. King surveyed the western coast to complete the map initiated by Flinders 20 years earlier. The Mermaid had been leaking badly and King needed to find a shallow sandy bay where he could careen his boat to undertake repairs. At a high tide, on a warm September afternoon, he ran the Mermaid onto the sands. For ten days the Mermaid crew worked hard before refloating the vessel. The shipâ€™s carpenter carved the name of the vessel and the year into a conspicuous boab tree. The famous boab tree is now 3 metres wide and National Heritage listed. A reminder of a by gone era of exploration!

King George River
The journey up the King George River is nothing short of breathtaking. The 80-metre-high sides of the gorge display varying degrees of weathering of the ancient Warton sandstone. The colours and textures of the gorge change with the light as you travel further up the river creating a continual changing scenery that is simply stunning. The journey culminates at the King George twin falls; the highest single-drop falls in the whole of the Kimberley (80 m or 260 ft). Fed by wet season run-off the level of water cascading over the falls varies from year to year. Your Expedition Team will escort you in either the ZodiacsÂ® or ships tenders to the foot of the twin falls, and explain all about the stunning geological formations of the canyon.

Darwin
Darwin is located in Australiaâ€™s Northern Territory which is also known as the â€œTop Endâ€. It is the capital city and the most populated town of the Northern Territory. Darwin is a beautiful tropical city, a melting pot of people and cultures, over 50 different cultures live and work side by side that prides itself in its unique and friendly laid-back lifestyle. Come discover the townâ€™s still recent history through its emblematic buildings such as the new Parliamant House opened in 1994, a magnificent example of tropical architecture or Admiralty House declared heritage place, a tropical-style home elevated on stilts that has survived two cyclones and numerous air raids.