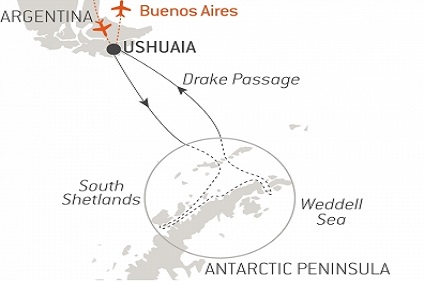 PONANT invites you on a polar expedition cruise to the heart of the icy realm that is the Antarctic Peninsula. Embark on an unforgettable 11-day voyage and succumb to the enchantment of the breathtaking landscapes inhabited by astonishing wildlife.

The start of your cruise will be marked by the crossing of the mythical Drake Passage, during which you will probably be escorted by several albatrosses and Cape petrels, the sentinels of these often-choppy waters.

Your ship will then reach the White Continent, realm of the unexpected. Weather and ice conditions permitting, this extreme environment where nature reigns supreme will reveal to you its most beautiful secrets through numerous discoveries.

On this uninhabited land, which wasnâ€™t explored until the 19th century, your encounters with the wildlife will no doubt be one of the highlights of your experience. The Gentoo, Adelie and chinstrap penguins, humpback whales, seals and seabirds will provide you with cherished lifelong memories.

Each day, whether on land, aboard your ship or during a ZodiacÂ® outing, you will be surrounded by a grandiose decor ranging from icebergs to ice floe and ancient glaciers.

Each day, based on ice conditions, the Captain and the Expedition Leader will suggest ZodiacÂ® outings or landings to discover the infinite riches of the Antarctic Peninsula. Glaciers, ice floe, tabletop icebergs, mountain peaks that plunge straight into the sea, volcanic beaches, research stations, enchanting bays, and vestiges of the whaling industry: these are the faces of the Antarctic that will likely reveal themselves to you, in a hushed and surreal atmosphere. You will sail in the wake of Jean-Baptiste Charcot, Adrien de Gerlache and Sir Ernest Shackleton, great Antarctic explorers who, from the 19th century, set out to conquer these remote and uninhabited lands.

Drake Passage
If there is one place, one sea, one waterway dreaded by tourists, researchers and hardened seafarers alike, it is undoubtedly Drake Passage. Situated at the latitude of the infamous Furious Fifties winds, between Cape Horn and the South Shetland Islands, it is the shortest route to Antarctica. Seasoned navigators will tell you that you must earn your visit to the White Continent! As the Antarctic convergence zone where cold currents rising up from the South Pole meet warmer equatorial water masses, Drake Passage harbours a very diverse marine fauna. Don’t forget to look to the sky to catch a glimpse of elegant albatross and Cape petrels, playfully floating about in the wind around your ship.