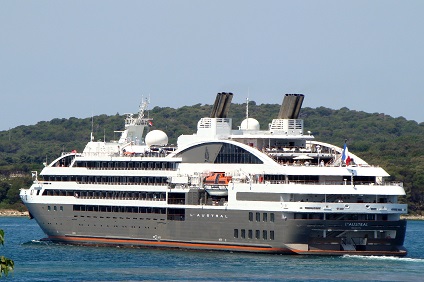 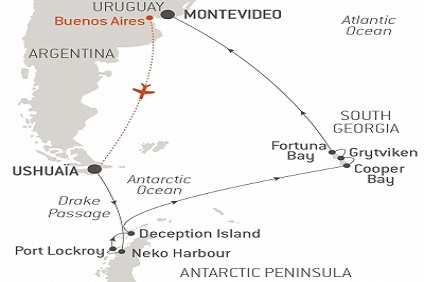 Your trip will begin in Ushuaia, the Argentinian capital of Tierra del Fuego which offers breathtaking landscapes.

After crossing the mythical Drake Passage, your ship will make its way to the White Continent, realm of the unexpected. Weather and ice conditions permitting, this extreme environment where nature reigns supreme will reveal to you its most beautiful secrets through numerous discoveries.

Gentoo, Adelie and chinstrap penguins, humpback whales, seals and seabirds: these are some of the encounters you will most likely have the chance to experience in the Antarctic Peninsula, creating indelible memories.

Each day, whether on land, aboard your ship or during a ZodiacÂ® outing, you will be surrounded by a grandiose decor ranging from icebergs to ice floe and ancient glaciers.

You will then discover South Georgia, its impressive glaciers and its black-sand beaches where imposing colonies of king penguins have taken up residence.

Your arrival in the city of Montevideo in Uruguay will mark the end of your trip into the heart of these stunning, faraway lands.

Each day, based on ice conditions, the Captain and the Expedition Leader will suggest ZodiacÂ® outings or landings to discover the infinite riches of the Antarctic Peninsula. Glaciers, ice floe, tabletop icebergs, mountain peaks that plunge straight into the sea, volcanic beaches, research stations, enchanting bays, and vestiges of the whaling industry: these are the faces of the Antarctic that will likely reveal themselves to you, in a hushed and surreal atmosphere. You will sail in the wake of Jean-Baptiste Charcot, Adrien de Gerlache and Sir Ernest Shackleton, great Antarctic explorers who, from the 19th century, set out to conquer these remote and uninhabited lands.

South Georgia
Aboard your ship, discover South Georgia, a region formed by an underwater mountain chain that extends from the Andes to the Antarctic Peninsula. All the wildlife of the Far South can be found there: king and Gentoo penguins, elephant seals, fur sealsâ€¦ You might get the chance to discover the majestic glaciers of Gold Harbour and the vast plains of Fortuna Bay. If you are fortunate enough to land at Salisbury Plain, you can expect a wonderful spectacle: more than 300,000 king penguins, which you will recognise by the bright orange mark on their head and neck, have taken up residence there.

Montevideo
Perched on the far southern tip of Uruguay, Montevideo is a white city, and one of the loveliest capital cities of South America. Come and admire the beautiful historical remains dating from Spanish rule; youâ€™ll find the most interesting within the Cuidad Vieja, formerly fortified, its old town dates from the 18th century. The best preserved are the cathedral and the former governmental palace of the Cabildo, both listed historical monuments. In the crook of a vast blue bay, the city is also blessed with beautiful beaches.