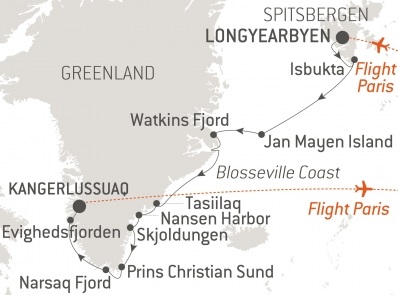 14 Night Cruise sailing from Longyearbyen to Kangerlussuaq aboard L’Austral.

Set sail with PONANT on an new itinerary discovering the unexplored shores of the eastern coast of Greenland. During this 15-day expedition cruise, you will follow in the footsteps of the great French explorers who pushed the boundaries of polar navigation from the 19th century onwards.

From Longyearbyen in Spitsbergen, Lâ€™Austral will make its way to Jan Mayen Island, which was very dear to Captain Jean-Baptiste Charcot. Located on the threshold of the Arctic and North Atlantic Oceans, this isolated and uninhabited volcanic island was a whale hunting centre and is home to large bird colonies.

Your ship will then sail on toward the west coast of Greenland, known for its wild natural environments, its alpine landscapes, and its sea ice carried along the Transpolar Drift.

You will then sail along the Blosseville Coast, named after the French captain who saw it for the first time in 1833. Here, the ice sheet meets the sea.

During the last part of your cruise, you will sail up the west coast of Greenland. You will be able to admire the sublime fjords of Prins Christian Sund and the blue-tinged icebergs of Narsaq, before heading for Kangerlussuaq, where this unforgettable cruise will end.

Longyearbyen
Longyearbyen is the capital of the Norwegian Svalbard archipelago, located on Svalbardâ€™s main island, and is the northernmost territorial capital on the planet. With winter temperatures dropping to below 40Â°C, the landscapes of this mining town are simply breathtaking. The glaciers, the mountains stretching as far as the eye can see and the untouched nature, make you feel like youâ€™re in completely unexplored territory.

Prins Christiansund
Your ship glides silently towards the Greenland coast, in a setting punctuated by pointed peaks and majestic glaciersâ€¦ You are on the verge of crossing the Prins Christian Sund, a narrow channel that stretches out and zigzags over some one hundred kilometres between Greenlandâ€™s south-east and south-west. Fall under the spell of the primitive beauty of these unique landscapes, including rocky cliffs and waterfalls that are fed by the ice sheet and plunge into the icy waters. Here, bearded seals love to lie on the floating ice to soak up the sunshine. If you are lucky, you may get to witness an aurora borealis, a stunning light show put on by the polar nightâ€¦

Jan Mayen Island
The island of Jan Mayen, belonging to Norway, lies hidden off Greenlandâ€™s coastlines, lost between the Arctic Ocean and the North Atlantic Ocean. This small piece of land is inhabited by only a handful of Norwegian meteorologists. Tongues of ice descend from its volcanic summit, which culminates at 2,227 metres and is covered with a thick glacial coat. These tongues join the sea, between ranges of black volcanic rocks at times tinged with red. If the sky is clement, you will have the chance to glimpse the summit, decked out in magnificent light. The visit of a small fin whale will perhaps enable you to complete this memorable picture.