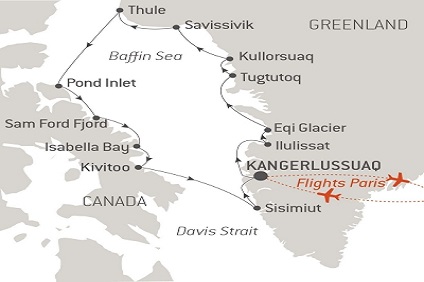 PONANT invites you to set sail aboard L’Austral for a memorable 14-day expedition cruise to the discovery of Baffin Bay. You will embark in Kangerlussuaq for an unforgettable journey in the heart of the most magnificent Arctic landscapes.

The first destination is the North-West coast of Greenland which will welcome you with its majestic icebergs, colourful villages encircled by mountains and its basalt formations. This is the ideal opportunity for meeting the local population and learning about Greenland Inuit culture.

The North of Greenland will then reveal its remote villages of peat houses where the last bear hunters and narwhal fishers live in the middle of the Arctic tundra according to their ancestral traditions. You will also see the remains of ancient Inuit civilisations and will discover Savissivik, the largest â€œiceberg graveyardâ€ in Greenland.

During the last days of your cruise, L’Austral will sail along the eastern coast of Baffin Island, in the Nunavut, Canada. With its immense cliffs, bird colonies and fjords, this destination will definitely delight you.

NOTE: Subject to ice and weather conditions. The expedition highlights and itineraries described above illustrate possible experiences only and cannot be guaranteed.

Ilulissat
At the heart of Disko Bay – a UNESCO World Heritage Site – the Ilulissat Icefjord provides an extraordinary spectacle of almost surreal beauty, with the largest icebergs of the northern hemisphere. The sculptural icebergs continue their timeless journey, shimmering with their eternal light. Vast pieces of ice break off from the bergs and rejoin the inexorable movement of the sea. Close by lies the town of Ilulissat, the regionâ€™s principal destination. Encircled by icebergs, it has retained a unique mix of traditional Arctic life, with multicoloured wooden houses, huskies and the leather tanners who still work today using the ancient methods of their ancestors.

Thule
Welcome to Greenlandâ€™s northernmost town. With some 600 inhabitants, Qaanaaq, which is also called â€œNew Thuleâ€, perfectly illustrates the quintessence of Inuit culture. Shrouded in darkness during the long winter months, this town, where most people get around by dog sled, was created in the 1950s. The Inuit, who at the time lived some one hundred kilometres further south, were forced to settle here after an American air base was created in their home village.

Pond Inlet
On Baffin Island, located in northern Canada at the mouth of the famous NorthWest Passage, there is a small Inuit settlement at the very bounds of infinity. To get there, cross the Arctic Circle, the imaginary line that separates man from lands of mystery and wonder. Itâ€™s not so much the way of life that sets Pond Inletâ€™s inhabitants apart, so much as the setting. Snow-capped mountains, fjords and glaciers combine in a dazzling natural environment that fills space and expands time. Some discoveries change you forever: this is one of them.

Sam Ford Fjord
All around you is a raw landscape of spectacular beauty. Nothing seems to want to disturb the silence. You are in the Sam Ford Fjord, on the east coast of Baffin Island. Located only a few kilometres away from the Inuit community of Clyde River, this fjord has the kind of worldâ€™s end appearance that only the Arctic lands can offer. From your ship, allow yourself to be dazzled by the series of vertiginous cliffs plunging into the waters of the fjord. These impressively high walls of rock, known worldwide to climbing enthusiasts, are reflected in the waters of the fjord, as though to completely shift perspectives and blur the lines between land and sea.

Sisimiut
During your cruise, we invite you to discover Sisimiut, founded in 1756 and the second largest town in Greenland. This small town is typical of Greenland, boasting bewitching panoramas: here and there, colourful stilt houses dot the undulating landscape, and the small fishing port stands as the gateway to an icy realm. As for the town centre, it is home to a number of historic buildings, a small church and a museum which retraces the history of the Inuit people, as well as many craft shops. When your ship drops anchor here, you will set out to meet the locals in a typically arctic atmosphere.