Situated on the Emerald Deck, six 150-square-foot Category 1 cabins each feature a marble bath with shower with Molton Brown toiletries, a Tauck Exclusive.

Three Category 2 cabins are located on the Ruby Deck, measuring 150 square feet and featuring one floor-to-ceiling French Balcony with one sliding door.

1. One-and-a-half deck window that opens at the top, electronically controlled

13. Storage / drawers (credenza not visible from this perspective)

14. 32” LED TV (on credenza below; not visible from this perspective)

1. One floor-to-ceiling French balcony (98 inches x 75 inches) with one sliding door that opens

Sixteen elegant 225-square-foot Category 6 cabins, each featuring a floor-to-ceiling French balcony with one sliding door, are situated aft on the Ruby Deck.

1. One floor-to-ceiling French balcony (98 inches x 75 inches) with one sliding door that opens

4. Walk-in closet with built-in shelves and a safe

* Iron plus ironing board

The new Inspiration Class ships maintain Tauck’s high standards for luxury and comfort… and take their name from ms Inspire, which will cruise exclusively on the Rhine and Moselle rivers. With a maximum of 130 guests, ms Inspire and her sister ship ms Savor continue our tradition of providing the most space per guest on Europe’s inland waterways – we will transport the fewest passengers of any longship (135 meters). Our deck plan for our Inspiration Class riverboats is innovative. With a total of 67 cabins, our most popular cabins tend to be our largest… so we have used the added ship length to offer twenty-two 300-square-foot-suites aboard ms Inspire and her sister ship – the most of any river cruise ship on any European river. To increase the amount of natural sunlight on the lower deck, we’ve created 8 loft cabins that extend from the first to the second decks, providing guests with an additional view; all windows in these loft cabins open.

We couldn’t find just the right words to describe the sumptuous new bedding and amenities we custom ordered for your in-cabin cruising comfort… 400-thread-count satin bed linens made from the finest combed cotton… puffy white duvets and pillows of very fine mako cotton, with a hypoallergenic 90% down filling… 100% cotton blankets, temperature balancing and so soft to the skin… and thick pillow-top mattresses that lull you to sleep… along with the Essentials Line of Molton Brown bath products, exclusive to Tauck… absorbent terry cloth robes and fluffy towels… hair dryers… but we do know they are key for waking up refreshed and relaxed for your traveling pleasure.
– See more at: http://www.tauck.co.nz/river-cruises/river-cruise-ships/ms-inspire.aspx#sthash.2wN88GyY.dpuf 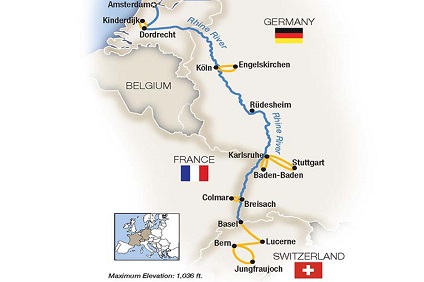 Follow the romantic Rhine River on its winding journey through Central Europe, taking in the sights, history and culture of Germany, Switzerland, The Netherlands and France, as your riverboat glides along the river.

Experience medieval winetowns, cathedrals, castles, museums, and river landscapes of the kind that inspired JMW Turner and Richard Wagner. Enjoy a two-night stay at a luxury hotel in Bern, with a choice of a city tour or a trip up to the Jungfraujoch in the Alps, and an idyll in Lucerne; sail from Basel with visits to Colmar, Stuttgart, Rudesheim and Cologne… a Tauck Exclusive evening of dinner and music at Schloss Ehreshoven… a visit to the windmills of Kinderdijk, and exploration of Amsterdam including a canal boat tour along the city’s historic waterways.

Rudesheim
Rudesheim is a town in the Rheingau-Taunus-Kreis, Hesse, Germany. It is located on the right (east) bank of the Rhine, at the southern entrance to the Loreley valley.

Rudesheim has been famous for its Drosselgasse since the end of the 19th century. Its wine bars and cafes offer non-stop music and dancing. The Castle Broemserburg houses the famous Wine Museum.

Other attractions include the Museum of Medieval Torture, and Siegfried Wendel’s Mechanical Music Cabinet, which has an extensive variety of mechanical musical instruments, distributed throughout a 15th century castle.

Basel
Basel is located where the Swiss, French and German borders meet, in northwest Switzerland on the river Rhine. It is among the most important cultural centres of Switzerland. The city comprises a large number of theatres and many museums, including the Museum of Fine Arts, the world’s oldest art collection accessible to the public.

Basel features a great number of heritage sites of national significance. These include the entire Old Town of Basel as well as churches, monasteries, secular buildings, archaelogical sites and museums. Most of the “old town” attractions in Basel are in a walkable area between the Basel Zoo (just south of the Basel SBB train station) and the Rhine. Since most stores are closed on Sundays, it is a good day to plan to see one of the many museums, which are usually open.