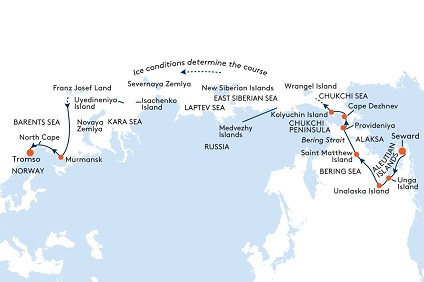 31 Night Cruise sailing from Seward to Tromso aboard Hanseatic Inspiration.

The time has come to write history on one of the world’s most challenging nautical routes. The Northeast Passage is a journey that any true explorer should pursue at some point in their lives. Even in the 21st century this remains a pioneering feat, perhaps even a journey into the self.

Seward
Seward is a city in Kenai Peninsula Borough in the U.S. state of Alaska, located 126 miles south of Anchorage. The city is very picturesque and quaint; it resembles a port city and an alpine resort town and is known as the “Gateway to Kenai Fjords National Park”.

Seward is also one of the oldest towns in Alaska. The historic district is full of art galleries, local handicraft shops and other shops of keen interest to tourists. Other attractions include the Alaska Sealife Center, a seven acre waterfront public aquarium. Glacier and wildlife cruises are also a must while visiting Seward.

The island has a land area of 137.857 sq miles (357.05 km2), making it the 43rd largest island in the United States. Its most southerly point is Cape Upright which features cliff faces which exceed 1,000 feet (300 metres). Similar heights are found at Glory of Russia Cape on the north and the highest point, 1,476 feet (450 metres) above sea level, lies south from the island centre.

There is a small island off its north-western point called Hall Island. The 3.1 miles (5.0 kms) wide sound between both islands is called Sarichef Strait. A small rocky islet called Pinnacle Rock lies 9.3 miles (15.0 kms) to the south of Saint Matthew Island. The entire island’s natural scenery and wildlife is protected as it is part of the Bering Sea unit of the Alaska Maritime National Wildlife Refuge.

The climatic conditions in the entire Bering Sea Area, according to National Climatic Data Center (1986) is reported as maritime with “considerable wind and cool, humid and cloudy conditions” with mean annual temperature of 3.2 Â°Centigrade.

In prehistory, the island was inhabited by members of the Aleut tribe. The first recorded attempt at settlement occurred in 1809, when a Russian group led by Demid Ilyich Kulikalov, under the guise of the Russian-American Company, established an experimental outpost. A 2013 sailing expedition to the island showed that, in spite of the lack of human habitation, extensive areas of beach were heavily contaminated with plastic marine debris, particularly from the fishing industry.

It is an ideal place for lovers of arctic land mammals, birds and flora that thrives in sub-freezing conditions. However, the reindeer population died out in 1980. There is an abundance of animal, bird and plant life still on St. Matthew Island for naturalist travellers.

The Alaska Cruise season begins in May and ends in September. Although July and August are the warmest months to experience these incredible sites, autumn and spring are the most fun, the most beautiful and the savings are the best.

Be prepared for one season colder than where you have travelled from. This is especially important for those who travel early and late in the season. The average temperature range is from overnight lows of 4c to daytime temperatures of 17c. The Inside Passage has an annual rainfall of over 50inchs but Anchorage rainfall is only 16inch pa.

Kolyuchin
Kolychin is a small island in the Chukchi Sea. It is not far from the coast, being only 11 km (6.8 mi) from the northern shore of the Chukotka Peninsula. The island is covered with tundra vegetation and is uninhabited.

On Kolyuchin Island there is a now-abandoned meteorological station which stands amidst thousands of nesting cormorants, murres, puffins and other seabirds. On the nearby shore there is the settlement of Nutepel’men, located north of the Rypatynonel’gyn Lagoon and south of the Pyngopil’gyn Lagoon.

Franz Josef Land
Franz Josef Land is is an archipelago located in the far north of Russia. It is found in the Arctic Ocean north of Novaya Zemlya and east of Svalbard, and is administered by Arkhangelsk Oblast. Franz Josef Land consists of 191 ice-covered islands with a total area of 16,134 km². It has no native inhabitants.

Franz Josef Land is a remote world of dense pack ice, towering volcanic mountains, icebergs and glaciers. Not discovered until 1873 by the Austrian Tegetthoff expedition, much of the vast archipelago is still relatively unexplored.

During a visit here you may see polar bears and walruses on the ice. If taking a helicopter ride enjoy spectacular views from the air and, subject to permissions, land at historic sites of early exploration. Aboard the helicopter see stunning aerial views of glaciers, icebergs and steep volcanic plateaus.

Murmansk
Murmansk is a city and seaport in the extreme northwest part of Russia, on the Kola Bay, 12 km from the Barents Sea on the northern shore of the Kola Peninsula, not far from Russia’s borders with Norway and Finland. It is an important naval base, fishing and shipping port, and home to Atomflot, the world’s only fleet of nuclear powered ice breakers.

Although Murmansk is long and thin, most sites of interest to visitors are within a fairly compact area in the city center. Prospekt Lenina is the main north-south thoroughfare through the city center. Attractions include the Regional History Museum, the Northern Navy Museum, the Alyosha statue and the huge Russian Orthodox Church. At the Oceanarium visitors can see trained seals perform in this white domed building.

Tromso
Tromso is a city and municipality in Troms county, Norway. Most of Tromsø, including the city centre, is located on the small island of Tromsøya in the county of Troms, 350 kilometres (217 mi) inside the arctic circle. The island is connected to the mainland by the Tromsø Bridge and the Tromsøysund Tunnel, and to the island of Kvaløya by the Sandnessund Bridge.

The city centre of Tromsø contains the highest number of old wooden houses in North Norway, the oldest house dating from 1789. The Arctic Cathedral, a modern church from 1965, is probably the most famous landmark in Tromsø. The city is a cultural centre for its region, several festivals taking place in the summer.