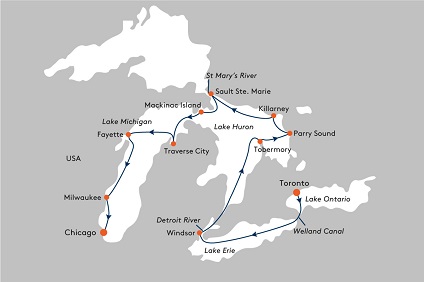 14 Night cruise departing from Toronto to Chicago onboard Hanseatic Inspiration.

The HANSEATIC inspiration will become your front-row seat in autumn on the lakes between Canada and the USA. Watch as the vast wilderness meets vivid history all around you.

Toronto
Toronto is the Canada’s largest metropolis, lying on the shore of Lake Ontario, the easternmost of the Great Lakes. Toronto is considered the cultural, entertainment, and financial capital of the nation. The city is also the seat of the Ontario government.

Toronto is a sprawling multicultural city, with some sixty significant minorities. There is a wide diversity of restaurants and you’ll see highrise buildings side by side with neo-Gothic and Art Deco architecture and exciting performing-arts and nightlife scenes.

Downtown and midtown boast most of the city’s best attractions, the most celebrated of them all is the CN Tower, the world’s tallest free-standing structure. Next door lies the modern hump of the SkyDome sports stadium. The city’s other attractions include the Art Gallery of Ontario, which possesses a first-rate selection of Canadian painting, and the Royal Ontario Museum, where pride of place goes to the Chinese collection.

The Thomson Gallery and Bata Shoe Museum are also worth a visit. The Toronto Gallery of Inuit Art, the Victorian gentility of Spadina House and the replica of Fort York, the colonial settlement where Toronto began, are also worth a look.

The town is known as the fresh water SCUBA diving capital of the world, because of the numerous shipwrecks that lie in the surrounding waters, especially in Fathom Five National Marine Park. Tobermory and the surrounding area are popular vacation destinations. People come for the beaches, the diving, the unspoilt countryside and the relaxed pace of life.

Chicago
Chicago is the third largest city in the United States. It is located on the southwestern shore of Lake Michigan. Chicago boasts world-class museums of art and science, miles of sandy beaches, huge parks and public art, and perhaps the finest downtown collection of modern architecture in the world.

Downtown Chicago is the place for work and play, with shopping, skyscrapers, big theaters, and the city’s most famous travel sights. Amongst the many attractions are Museum Campus, Navy Pier, Chicago Cultural Centre, Magnificient Mile and State Street.