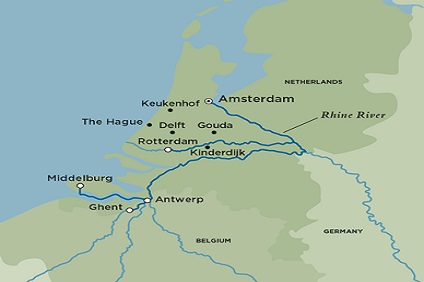 Europe’s only all-balcony, all-suite river ships are built to the highest standards of luxury and spaciousness. Standard accommodations – the largest in European river cruising – boast expansive Panoramic Balcony-windows in every suite with walk-in closets and double-vanity baths in most, and the latest cutting-edge technologies. The elegant, glass-ceilinged Palm Court – social hub of the ship – is the place to enjoy afternoon tea, aperitifs, cocktails and conversation.

One of four identical sister ships – European river cruising’s only all-balcony, all-suite, butler-serviced river ships – Crystal Debussy entered into service in April of 2018 and has been cruising the fabled Rhine River ever since. With all categories of accommodations situated above the waterline, Crystal Debussy and her sister ships offer an array of all-inclusives including unlimited fine wines, champagnes, premium spirits and beers, 24-hour room service, and an extensive selection of inclusive shoreside experiences. Crystal Debussy’s exceptional design and acclaimed service will welcome you aboard for an experience far beyond the ordinary.

Rotterdam
If other cities in the Netherlands can be characterized as quaint and charming, Rotterdam is best described as trendy and sophisticated. Much of its edgy personality is a result of a wiping out of its history, at least the tangible history as represented by its old buildings. The Rotterdam Blitz of World War II destroyed central Rotterdam, leaving it to be rebuilt with an innovative and contemporary approach to design. Modern buildings feature eye-catching curves, cubist references and materials of concrete, glass and steel. Old slices of the city still remain in Delfshaven, or Delft Harbor, and Oude Haven, or Old Harbor. Rotterdam’s energetic mix of old and new, along with a collection of outstanding museums, hotels and restaurants, helped make Rotterdam the Academy of Urbanism’s 2015 European City of the Year and consistently earn it top rankings for best places to visit.

Ghent
Buildings with stair-stepped gables, the meeting of the rivers Scheldt and Leie, intact and well-preserved medieval architecture, a brooding castle, the famed Ghent Altarpiece. Ghent has much to admire, including a grounded personality that doesn’t prove too protective of its treasures. Rather, the place is welcoming and hard working—and hard playing—a center of industry that trades goods and a lively cultural scene that exchanges ideas. Walk along Ghent’s pretty canals, wander into its stunning churches, stop to appreciate the flowers that adorn its squares and alleyways and become enchanted by a city that was once one of Europe’s richest north of the Alps and continues to enrich the experience of travelers.

Antwerp
Antwerp is home to the world’s largest diamond industry. Diamonds are mined all over the globe, but they are cleft, sawed, polished, refined and resold in Antwerp. The golden era of Antwerp was the 16th century, from which many of its monuments and architectural highlights date. The famous Brabo fountain, a monument to the city’s mythical hero Silvius Brabo, is located in the heart of the city. The city is proud of its artistic heritage, particularly its strong link with Rubens, who was born there and spent most of his life painting in and around the port. Visit his old house, the Rubenshuis, which has been well renovated and serves as a good introduction to the painter’s work. Another important piece of Belgium’s artistic heritage is the Onze-Lieve-Vrouwe Katedraal, an impressive Gothic structure. This church is home to three fabulous Rubens canvases, the most beautiful of which is the Descent from the Cross.