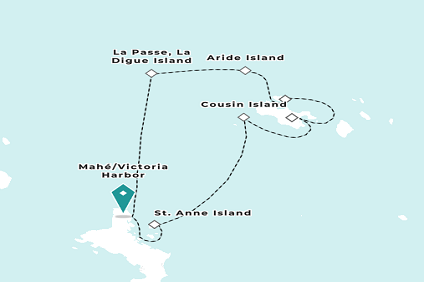 MAHÃ‰/VICTORIA HARBOR
This capital city of the Seychelles lies on MahÃ©, the largest of the 115 islands. It is not boastful about its importance to the islandâ€™s cultural and administrative center, as its mere two dozen avenues are cozy and inviting, backing up against steep mountains and bustling with cafÃ©s and colorful architecture. Visit the Botanical Gardens for a glimpse into the lush fauna that cloaks the island, and venture from Victoria in search of the Seychelles natural splendor.

PRASLIN
Praslin, the second largest island of Seychelles and arguably tops in attractions, features stunning beaches, azure seas, tangles of jungle and a trademark relaxed atmosphere. What makes Praslin unique is the VallÃ©e de Mai, a protected forest of rare fauna, and most famously the coco de mer palm, a tree that produces the worldâ€™s largest seed and palm flower. The grove is one of Seychellesâ€™ two UNESCO World Heritage Sites and has been aptly called the Garden of Eden.