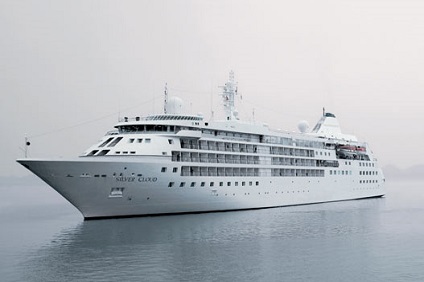 Your home away from home while you embrace the intrepid explorer within. The suite’s seating area has plenty of room to relax while you go over your notes, ready for the next adventure. Large picture windows frame panoramic ocean views, ideal for appraising the local wildlife.

A Silversea signature, the Veranda Suite is spacious and welcoming. Floor-to-ceiling glass doors open onto a furnished private teak veranda from where you can contemplate anything from the midnight sun to an antarctic sunrise.
Some Veranda Suites accommodate three guests (Suites going from 505 to 510
and from 605 to 610). The Deluxe Veranda Suite offers preferred central
location with identical accommodation to a Veranda Suite.

With a room configuration that favours watching the sun rise from the comfort of your bed and losing yourself in the mesmerising seascapes, this suite is the perfect answer to adventure cruising. A large walk-in wardrobe, and an expansive living make the Medallion Suite a your home away from home on the high seas.
Medallion Suites accommodate three guests.

Stylish and sophisticated with larger verandas, excellent for taking pictures and bird-watching. Situated midship, this suite is perfection in design and comfortable living. A huge walk in wardrobe, a beautiful marbled bathroom and a spacious living area completes the picture.
Silver Suites accommodate three guests.

Stately. Commanding and majestic. Perfect for relaxing after a days’ exploring and looking through your photos. With lectures being streamed live to your room, this is the pinnacle of good living at sea. Available as a one-bedroom configuration or as two-bedroom by adjoining with a Veranda Suite.

Expertly designed and exquisitely appointed. The ideal space for sharing stories with fellow explorers and new friends. With enough space to roam both in and outside, this suite is perfect relaxing and recounting the highlights of your day. Available as a one-bedroom configuration or as two-bedroom by adjoining with a Veranda Suite.

This stylish apartment offers the superlative in levels of space, comfort and service on board. A perfect mix of expedition experience with luxury lifestyle. Available as a one-bedroom configuration or as two bedroom by adjoining with a Vista Suite.

Stately. Commanding and majestic. Perfect for relaxing after a days’ exploring and looking through your photos. With lectures being streamed live to your room, this is the pinnacle of good living at sea.
Available as a one-bedroom configuration or as two-bedroom by adjoining with a Veranda Suite.

Expertly designed and exquisitely appointed. The ideal space for sharing stories with fellow explorers and new friends. With enough space to roam both in and outside, this suite is perfect relaxing and recounting the highlights of your day.
Available as a one-bedroom configuration or as two-bedroom by adjoining with a Veranda Suite.

This stylish apartment offers the superlative in levels of space, comfort and service on board. A perfect mix of expedition experience with luxury lifestyle.
Available as a one-bedroom configuration or as two bedroom by adjoining with a Vista Suite.

With 18-brand new Zodiacs, the only Relais & Chateaux restaurant in Antarctica and a pole to pole expedition itinerary, Silver Cloud really does break the ice between expedition and luxury.

After extensive refurbishment, Silver Cloud is the most spacious and comfortable ice class vessel in expedition cruising. Her large suites, her destination itineraries and her unparalleled service make her truly special. Her four dining options will tantalise your taste buds and as 80% of her suites include a veranda, watching a breaching whale or a few cavorting penguins has never been so personal. A limited number of guests in polar waters, mean that Silver Cloud has the highest space to guest and crew to guest ratios in expedition cruising. With her 18 zodiacs, 10 kayaks, possibilities are almost limitless with ship-wide simultaneous explorations. 10 Night Cruise sailing from Reykjavik to Kangerlussuaq onboard Silver Cloud.

Greenland – that ultimate traveller’s destination – is a combination of natural beauty laid bare, zero commercialisation and opportunities for extreme wildlife watching on Greenland’s eastern shore. Follow the ice’s edge on this voyage that sees the world’s most sparsely populated country in all her glory! Expect a lot of Norse history, natural hot springs ripe for bathing, never setting sun, and smatterings of colourful painted cottages flanking the shores.

Reykjavik
Sprawling Reykjavík, the nation’s nerve center and government seat, is home to half the island’s population. On a bay overlooked by proud Mt. Esja (pronounced eh-shyuh), with its ever-changing hues, Reykjavík presents a colorful sight, its concrete houses painted in light colors and topped by vibrant red, blue, and green roofs. In contrast to the almost treeless countryside, Reykjavík has many tall, native birches, rowans, and willows, as well as imported aspen, pines, and spruces.Reykjavík’s name comes from the Icelandic words for smoke, reykur, and bay, vík.

Nanortalik
Nanortalik lies in a scenic area surrounded by steep mountainsides and is Greenland’s tenth-largest and most southerly town with less than 1500 inhabitants. The town’s name means the “place of polar bears”, which refers to the polar bears that used to be seen floating offshore on summer’s ice floes. Nanortalik has an excellent open-air museum that gives a broad picture of the region from Inuit times to today. Part of the exhibition is a summer hunting camp, where Inuit in traditional clothing describe aspects of their ancestor’s customs and lifestyle.

Hvalsey
Northeast of Qaqortoq and at the end of a fjord, Hvalsey is one of the best examples of South Greenland’s many scattered ruins from the Norse period. Today the area is used for sheep-grazing, but until the 15th century the settlement at Hvalsey, and specifically Hvalsey’s church, played an important part. Christianity had spread its influence throughout Europe and eventually had reached remote Greenland, where it established itself in the country in 1000 AD. Hvalsey Church was built in the 14th century and is the best preserved of the churches in Greenland from that period.

Nuuk
Nuuk, meaning “the cape”, was Greenland’s first town (1728). Started as a fort and later mission and trading post some 240 kilometers south of the Arctic Circle, it is the current capital. Almost 30% of Greenland’s population lives in the town. Not only does Nuuk have great natural beauty in its vicinity, but there are Inuit ruins, Hans Egede’s home, the parliament, and the Church of our Saviour as well. The Greenlandic National Museum has an outstanding collection of Greenlandic traditional dresses, as well as the famous Qilakitsoq mummies.

Ilulisat
Known as the birthplace of icebergs, the Ilulissat Icefjord produces nearly 20 million tons of ice each day. In fact, the word Ilulissat means “icebergs” in the Kalaallisut language. The town of Ilulissat is known for its long periods of calm and settled weather, but the climate tends to be cold due to its proximity to the fjord. Approximately 4,500 people live in Ilulissat, the third-largest town in Greenland after Nuuk and Sisimiut.

Kangerlussuaq
Kangerlussuaq is a settlement in western Greenland in the Qeqqata municipality located at the head of the fjord of the same name (Danish: Søndre Strømfjord). It is Greenland’s main air transport hub and the site of Greenland’s largest commercial airport. The airport dates from American settlement during and after World War II, when the site was known as Bluie West-8 and Sondrestrom Air Base. The Kangerlussuaq area is also home to Greenland’s most diverse terrestrial fauna, including muskoxen, caribou, and gyrfalcons.