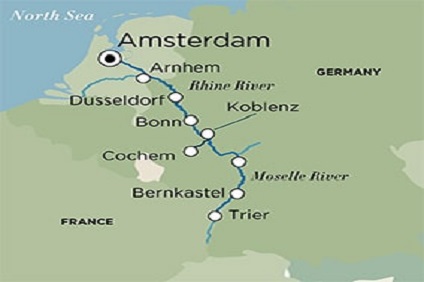 Experience a journey along the river less traveled and the fairytale sites of Germany and the Netherlands. Venture to meccas of music and art in Bonn, the hometown of Beethoven, and Dusseldorf, a hub for contemporary fashion and architecture. Explore the famed Mosel Wine Region that embraces the Moselle River, and trace the path of history along cobbled alleyways and charming town squares.

Trier
Visitors to Trier may feel the need to double check their GPS to ensure they didnâ€™t take a wrong turn near Rome. Fair enough, since the town that sits on the border of Luxembourg was founded by Romans, and still bears remarkably preserved evidence of the culture. Known as â€œSecond Romeâ€ for its remaining Roman baths, amphitheater and imposing Porta Nigra gateway, Trier is among the oldest cities in the world, celebrating its 2,000th anniversary in 1984. It has since become synonymous with the rolling wine vineyards of the Rhineland that follow the Moselle, with the 12th century Eltz Castle watching over the town.

Bonn
A 2,000-year history has given Bonn many opportunities to reinvent itself and its role on the global stage, and it has done just that. Founded by Romans, like its nearly neighbor, Trier, Bonn was the onetime capital of the Electorate of Cologne, the site of the largest known Roman fortress, and, more recently, the capital of West Germany from 1949 to 1990, when reunification moved the government to Berlin. Bonn is still considered the unofficial second capital of the country, and is home to several governmental operations, as well as more than 20 United Nations institutions. Even throughout its centuries of political and powerful prominence, Bonnâ€™s most famous son remains composer Ludwig Von Beethoven, who is commemorated in a museum at the site of his birth home in the city.